56º32.5' N 61º41' W
Chart 4748 Nain and Approaches
Canadian Pilot: Labrador and Hudson Bay, ch V, p 252
Admiralty Pilot 50: Newfoundland and Labrador, 14.103
Cruising Guide to the Labrador E-15
Variation: 29ºW (11' E) (1997)
Spring Range approximately 7 ft
Nain is the main settlement in N Labrador and the furthest N. It is situated on Unity Bay.
Approach
The approaches to Unity Bay are straightforward.
Anchorage
We anchored to the NE of the Government Jetty, just outside the fishing boat moorings, in 5 fms, good holding. On the W side of the jetty is a dinghy dock, but be prepared to have the local children have fun with your tender as soon as your back is turned. After some boys had damaged our dinghy while playing with it – despite being asked not to – we landed on the beach near the airstrip and had no further trouble.
It is usually possible to lie alongside the jetty, which may be useful for embarking fuel, water or stores. Unity Bay is wide open to the NE and E; in these winds, Kauk Harbour would be preferable.
Remarks
The fuel depot is across the bridge at the W end of town. Small quantities of fuel can be obtained by jerrican and paraffin is sold in 20 litre tins. Larger quantities of fuel can be delivered in a tanker, by arrangement.
There are two reasonable supermarkets/general stores, a bakery (over the bridge) and a take-away food shop. The Lodge has a restaurant with a restricted daily menu. They kindly let us use their inexpensive washing and drying machines.
Nain also has a Post Office, a bank and a hospital.
Labrador Air Services and Interprovincial fly regularly to settlements S of Nain and to Goose Bay. The coastal ship takes passengers and calls every 2 weeks in summer.
The Moravians established the settlement in 1771 as a Mission station. The large church and dormitory building (similar to those at Hopedale and Hebron) burnt down many years ago, and the existing church is much smaller. The majority of the population is Inuit. 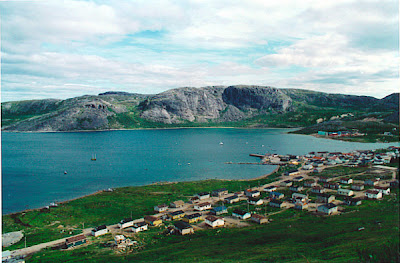 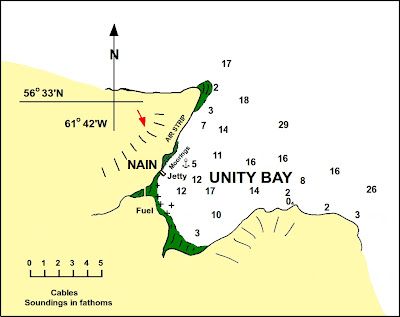