Blackguard Bay provides anchorage in the S half of the bay.

Approaching from the E, there is a channel between Indian Head and Cartwright Island, called the Bull Gut, fairly narrow, but with a least depth of 2 fms. Pass S of the three islets.

The approach from the N is straightforward, if either shore is given a good berth - particularly keep clear of Mad Moll, off Cartwright Island.

We anchored off the W shore, opposite Indian head, in 13 ft. It is sheltered from S through W to N. The drying rock SE of the anchorage shows at low water. A northerly swell entered the bay, when visited.

In an E wind, Indian Cove may well provide better shelter, but it was not investigated. 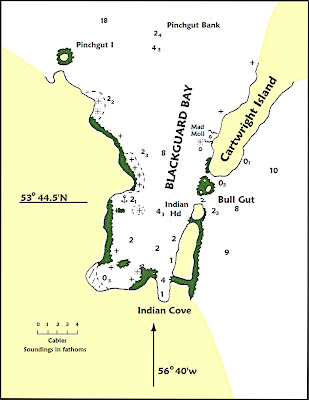