There are at least two uncharted drying rocks, less than 2 M N of the ‘Recommended Track’, between Cape White Handkerchief and Big White Bearskin Island.

The charted group of skerries, in position 59º21.5' N 63º37' W, SW of Beacon Island, is a boulder moraine that covers at high water springs and does not always break.

THE HARBOURS AND ANCHORAGES

The approach is straightforward.

Anchor near the head of the cove in 3 fms, sand. The cove is open to N and NE.

A cabin stands on the shore - probably only used at weekends in the summer. There is a track, leading to the village of 'Lancy Loo'. 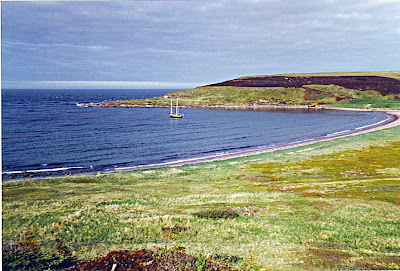 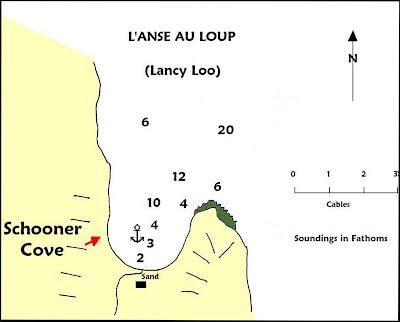 Red Bay is on the Labrador side of the Strait of Belle Isle. It is a landlocked harbour, but quite strong winds can funnel through the Basin. The wreck on the shore of Saddle Island was caused by this type of wind.

The approach is straightforward: pass W of Saddle Island. The overhead cable to Saddle Island, on its NE side, has only about 24 ft clearance (not 124 ft, as charted).

We anchored as shown on the sketch chart, in The Harbour, in 5 fms.

The main attraction in Red Bay is the museum about Basque whaling, carried out in Red Bay in the sixteenth century. It is well worth a visit.

Don’t miss the video film about the excavation of the San Juan, which was wrecked in 1565, off Saddle Island. A walk around Saddle Island is also worthwhile to view the remains of the whalers’ shore stations. 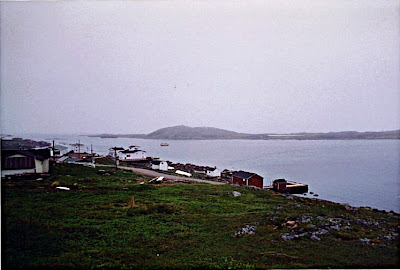 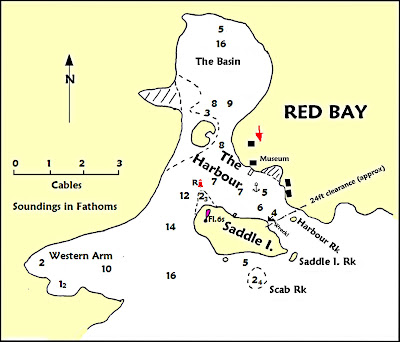 In 2004 we were told it was OK to lie alongside the dock, which was prefectly comfortable and convenient: the wind and sea outside were moderate