INTRODUCTION
These notes have been compiled in the hope that they may be of use to small-boat sailors who are planning a cruise to Labrador. They are no more than simply notes and record places visited during summer cruises in 1997 and 2002. The anchorages were visited in mostly good weather and any comment as to their general suitability must be judged bearing this in mind. The sketch charts are not more than that, and are intended to expand the information available from formal surveys. The soundings given are along the track that we took, and in no way represent a survey of the anchorages - proceed with caution. Due to the fact that the majority of the Canadian charts covering the area are in Imperial measurements, the sketch charts have been drawn accordingly.
The Labrador is a wonderful cruising ground, with countless anchorages, many of them uncharted and unexplored. The whole coast is little populated with no-one living north of Nain. Scenery is often spectacular, particularly in the north.

For some mysterious reason, the area is little visited. In 1997 we saw only two other yachts north of Newfoundland and only one in 2002. Considering how accessible this coast is from either the USA or the UK, it is little short of amazing how few yachts visit the area - many more sail to the South Shetland Islands each year.

A yacht needs to be self sufficient north of Nain, and even to the south, not much is available beyond basic provisions and fuel. When cruising this area, a yacht needs to have heavy ground tackle and due to the prevalence of kelp, a good fisherman anchor, such as the three-piece one made by Luke, is almost essential. (This piece of equipment can be supplied by Henry Fuller at Cape Breton Boatyard, who usually has one or two in stock. Tel (+1) 902 295 264.)

The price a yachtsman must pay for this superb cruising ground is a combination of fog, blackflies, mosquitoes, the threat of ice (in a bad year), inadequate charts and a lack of weather forecasts, but it is all very worthwhile.

While Canadian charts are the best ones to have, they vary enormously from old, dubious surveys in the north, to up-to-date, recent surveys in the south. The majority of the charts are still in Imperial measurements. The new-style Imperial charts are coloured identically to the Metric charts and as contiguous charts can change from one measurement to the other, it is very necessary to be aware of this fact. The measurements are not particularly clearly noted and as the size of many of the charts necessitates their being folded even on a full-sized Admiralty chart table, it is recommended that they be clearly marked in two or three places in order to save confusion.

The chart data also vary from one to another; GPS will be less unreliable if the navigator is aware of this. 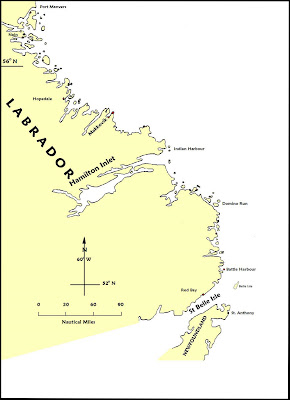