Variation: 31°W (17' E) 1977
Spring Range approximately 6 ft
General
While passing through the Beacon Island Channel, the tide turned against us and the wind disappeared. We anchored off the small cove S of Beacon Island in 5 fms.

Approach is along the indicated track on chart 4771.

Anchorage
The cove is sheltered from E through S almost to NW. There was little tidal stream felt there at anchor. 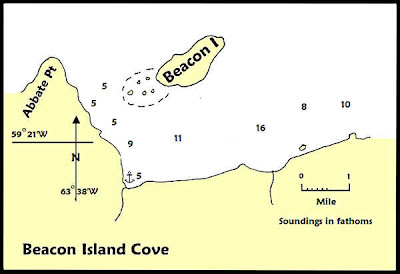 CAPE WHITE HANDKERCHIEF
While tacking past Cape White Handkerchief, we saw an uncharted, breaking rock. Its position is approximately 59°18.5' N 63°21.5' W. This is 1.75 M NE of the recommended track.


In 2002, it was noted that there are at least two uncharted drying rocks, less than 2 M N of the
‘Recommended Track’, between Cape White Handkerchief and Big White Bearskin Island.

The approach to Seaplane Cove is straightforward. It is safe to pass either side of Lone Rock, a skerry about 6 ft high. The rock shown on the chart about 100 yds N of Niakungutialuk (Big) Head, dries about 3 ft and generally breaks. Foul ground extends about 100 yds E of the unnamed W point of Seaplane Cove (59º22.7' N 63º48.3' W).

The best berth is in the W corner of the cove, in 24 to 30 ft. Swell from the NW may find its way in. Holding is excellent in mud with some kelp. The surrounding high land can produce strong blow-me-downs.

Iron Bark rode out sustained hurricane force winds in Seaplane Cove. After a 45 lb plough dragged, she lay to a 45 lb plough in tandem with a 45 lb Delta anchor on one chain and a 55 lb fisherman (Yachtsman) anchor on the other, with whatever assistance her 16 hp engine could provide.

A polar bear swam out to inspect Iron Bark and give her rudder a bat. 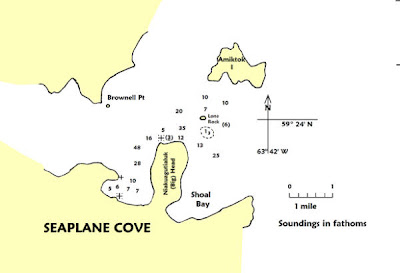 An unnamed bay close SW of Collins Point (at the E end of Goodfellow Peninsula) provides a good anchorage sheltered from all winds, except the SE quadrant.

Collins Point forms the S entrance to the Eclipse Channel. Approach along the recommended track, give Collins Point a reasonable berth, as there are a few rocks close off the point.

There are several rocks in the bay, but anchoring as shown on the sketch chart, we appeared to be well clear of any dangers. Anchor in 18 ft sand and weed. At the head of the bay there is a sandy beach at which you can land. We saw a caribou ashore at Collins Point, and a cave which appeared to have been used by a bear. Collins Point is low-lying and in contrast to the bulk of the Goodfellow Peninsula - an attractive anchorage. 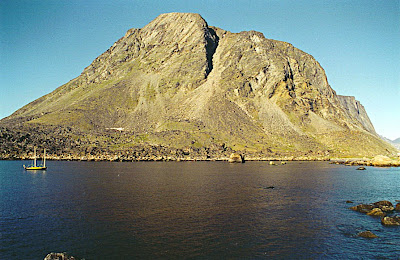 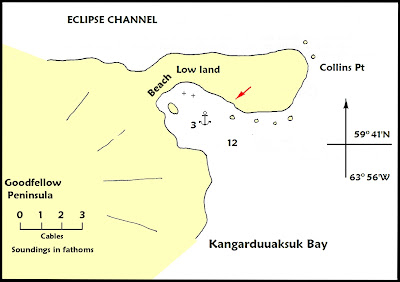 Bib Cove is at the entrance to Eclipse Harbour. It provides a spectacular anchorage beneath the towering cliffs of Mt Bache (2100 ft). There is good shelter from all but the N, but the very steep sides of the cove to the E may well cause squalls in strong winds. We visited in calm conditions and sunshine, when it was delightful.

The approach is straightforward, passing between the Platt Islands and Mt Bache Point; no dangers were observed.

We anchored off the shingle beach in the SE corner of the cove, in 5 fms. The bottom appeared to be sand, weed and rock.

A stream runs over the low cliff to the N of the beach: useful to top up supplies. On the beach, there was quite a bit of driftwood. 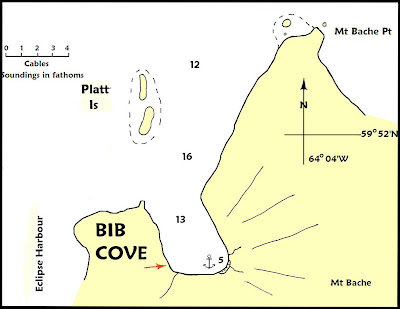 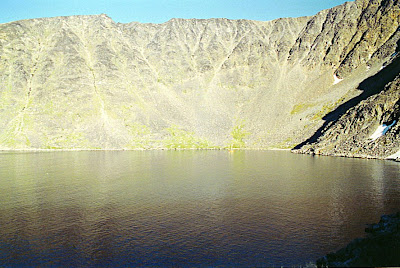 Shoal Bay lies W of Black Rock Point, N of Cape Kakkiviak. It is aptly named, but there is still plenty of water for most yachts. There is good shelter from all but the NE.

When approaching from the S, give the reefs off Black Rock Point a reasonable berth. From the W, pass N of Pomiuk and Mikak Islands, following the recommended track shown on the chart. Chart 4773 shows an alternative track S of Mikak Island, but we found the water shoaling quickly and abandoned the passage when in 9 ft of water.

We anchored in the two places indicated on the sketch chart, both having good holding in sand. 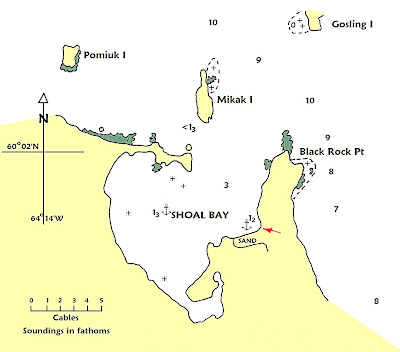 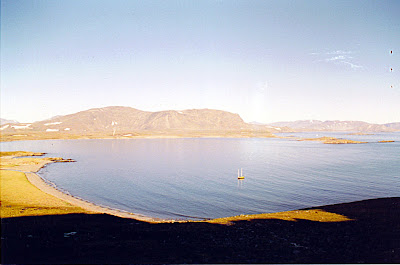