Indian Tickle is a narrow passage between Indian Island and Musgrave Land.
A bight on the W side of Indian Island provides a sheltered anchorage, although it is rather exposed to the SW quadrant.

The approach from the N is straightforward. The approach from S and E is much more complicated. Passing reasonably close E and N of Lynch Island, keeps one clear of Fish Rock, 0.5 M NW from Lynch Island. Then head for St Mary Island, in the entrance to Indian Tickle. In 1997, there were two red buoys in position, as shown on the chart. Keep these to starboard when sailing NW.

We anchored in the bight N of Rover Island in 16 ft. The cabin ashore was deserted. 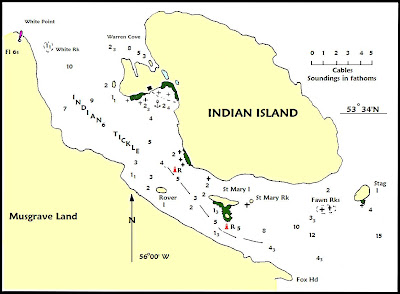