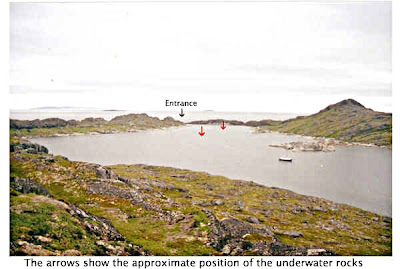 Edwards Harbour is a land-locked, keyhole harbour, with a narrow entrance. Use the excellent sketch chart by Jim Watson in the CCA Cruising Guide to the Labrador to enter.

The entrance is narrow (approximately 30 yds wide) but clear of dangers. There are two rocks to avoid inside the harbour. The first is not far in from the entrance and situated nearly mid-channel. It is a rocky ledge, covered with kelp and is difficult or impossible to see from the surface. The second rock is well into the harbour and dries 3 ft. It is a bald dome of light-coloured granite and when covered, shows as a pale patch in good light.

We passed E of both rocks without difficulty, but there appear to be several rocky ledges extending from the E shore in the vicinity of the first rock, which constrict the channel. The channel to the W of the first rock appears to be deeper and wider than the one to the E, but has a lot more kelp, which makes spotting ledges difficult.

We anchored in 18 ft, sand and weed, beyond the second rock. Holding appeared to be good. Protection is total.
Posted by Annie Hill at 3:15 pm