Packs Harbour is formed by a narrow channel between Hamilton Island and an unnamed island NW of it.

The NE entrance is foul with rocks. The SW entrance is quite narrow, but in 1997 was buoyed, which makes entry fairly straightforward. It is possible to pass either side of Pickens Island. Once past the green buoy, favour the Hamilton Island side as you pass the jetty.

Once inside, anchor anywhere in 3 to 4 fms. The harbour provides very good shelter.

Several of the cabins were occupied in 1997, but the fish plant at the W end of Hamilton Island appeared to have been closed for some time. 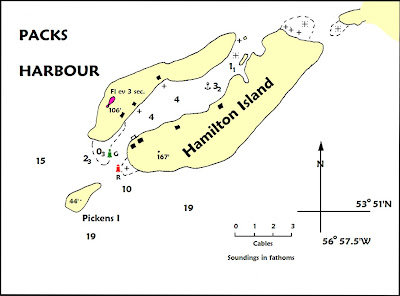