A clear passage exists between Saddle Island and the mainland, although it is somewhat restricted due to the kelp on either side. A minimum depth of 24m was found. When traversed, the wind was very variable in the passage and there was quite a jobble, which made sailing through very difficult.

This small cove was named by Gerry Clark, who anchored here. On the general chart of South Georgia, an island is marked between Saddle Island and the mainland. This island is actually joined to South Georgia by a narrow, shingle isthmus, which forms the SW end of the cove.

Approach from the NE and enter the cove between the kelp on either shore. On the occasion of Badger's visit, we did not actually anchor, but it appeared to be possible.


The suggested anchorage is near the head of the cove, just outside the line of kelp off the shingle beach, in about 11.5m. Shelter from the sea from the SE through W to NW. There was some swell in the cove. 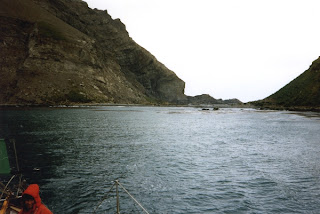 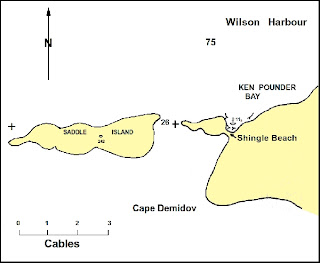