During the whaling era, the Postman delivered the mail to the stations in Stromness Bay by rowing across Cumberland West Bay from Maiviken to Carlita Bay, and then walking over the col to Husvik and on to the other two stations. At one time, there was a Postman's refuge hut, but this has now gone. Instead there is a newer hut, built by BAS in the early 60's. It is used as a refuge hut by the Garrison and is stocked with emergency supplies. When we visited in 1995, the hut had been damaged by storms with the floor, walls and roof all having been displaced from one another. Unless it is repaired, it will probably not last long.

The approach to Carlita Bay might well necessitate a certain amount of dodging around ice calved from the Neumayer Glacier.

Anchorage was found off the hut, in 4m, mud with no kelp. The bay is well sheltered from the W through N to NE. On the occasion of Badger's visit, there was quite a lot of ice in the anchorage and because of this, it would not be advisable to leave a yacht unattended or to anchor overnight in this bay.

From Carlita Bay, it is a fairly easy 2½ to 3 hour walk to Husvik. A good view of the Neumayer Glacier can be obtained by climbing the hill to the W of the bay. 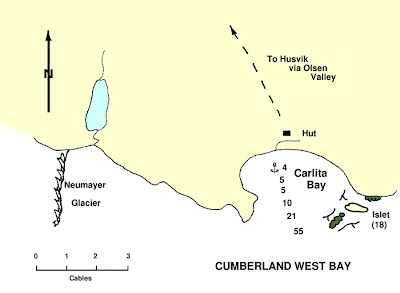 An anchorage was found in the cove at the W side of this bay, in 6.5m in a clear patch among the kelp. It is sheltered from the SW through W to N.

When we entered, the cove was almost ice free, but a few hours later, a bergy bit drifted in and threatened Badger's tranquillity. An alternative anchorage in Maiviken was chosen for the night. 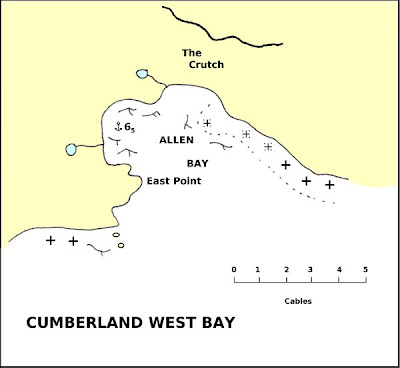