This is a large bay, with three glaciers at its head, namely the Neumayer, Geike and Lyell Glaciers. Small pieces of ice are often observed drifting out of the bay, most of which come from the Neumayer Glacier, the largest of the three.

Situated at the southern entrance to Cumberland West Bay, Maiviken is a sheltered anchorage. The best protection is to be found in the N part of the bay.

Anchor N of George Rock, in 4m, where it will be possible to find a patch that is clear of kelp.

On the two occasions that this anchorage was used by Badger, no swell or ice was encountered.

It is possible to pass either side of George Rock. The W passage is wider, but has more kelp than the one to the E.

Half way down the W shore, in Alert Cove, there is an old sealers' cave a short way back from the shingle beach.

A refuge cave with emergency supplies was situated in the SE corner of the bay, when we visited. This was stocked and used by the garrison at King Edward Point. It is a 2 mile walk from the cave to Grytviken along the Bore Valley. 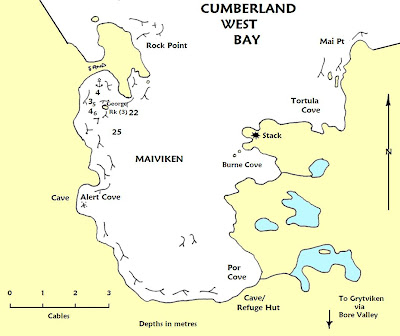