This coast is described in the Admiralty Pilot as being ‘little visited’, which is not surprising, because it is much wilder than are the N and E coasts. From Cape Nunez SE, there are few harbours and it is a lee shore to a SW gale. Added to this is the fact that the surveys of the area are not complete and rocks and reefs exist that are not marked on the chart. There is usually a big SW swell along the shore.

Treat this coast with respect.

The approach to Undine Harbour is not straightforward, with shoals, kelp banks and the odd rock extending E from the Birdie Rocks to Grassholm. Passing to the NW of Birdie Rocks or N of Grassholm will give the clearest approach, but care should be taken, as there are several uncharted rocks.

The entrance to Undine Harbour is easily identified with the conspicuous, flat-topped O'Connor Island (49m) marking the E side of the entrance.

We anchored in the NW corner in 6m, mud, off the conspicuous stream and outside the extensive kelp. The harbour gives good protection from all but the S.

During our visit, the shoals in Discovery Bay seemed to dampen down most of the swell in the anchorage.

A short walk over the low land at the head of the bay takes you to Elsehul. 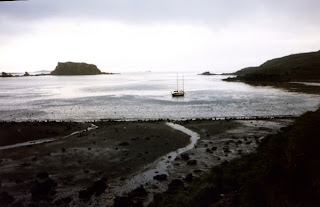 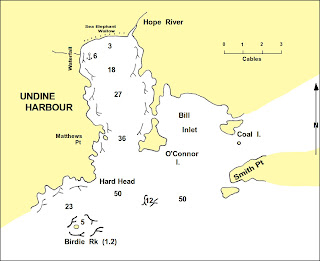