A band of thick kelp running SW-NE across the bay marks the terminal moraine. Towards the SW end of the kelp line is a conspicuous rock. Close NE of this rock, the kelp is much less dense. When entering the inner bay, we crossed this band of kelp about 100m NE of the rock. The minimum depth in the kelp was 3m, but just inshore of the kelp, the bottom shoaled to an estimated 1.5m at low water. Close N of the rock was a breaking wave, which suggested even shallower water.

On leaving the bay the following morning, we crossed the moraine approximately 200m NE of the rock. There was more swell and at times a breaking wave extended almost the whole length of the moraine, inshore of the kelp. When passing through this breaker, we were in 5.5m and found a minimum of an estimated 2.1m at low water just inshore of the kelp. Depths in the weed were about 3m. The kelp was fairly thick, but we motored through with no problems.

Anchorage was found off the middle of the 3 glaciers at the W end of the bay. A kelp-marked, terminal moraine enclosed an inner pool off the glacier, with a drying rock in the middle of the kelp. We anchored outside the moraine in 15m with the depth rapidly increasing to 21m off the moraine.

Close SW of this anchorage is a small cove, with a shingle beach, but it was completely choked with kelp. At the time of our visit, the glacier calved quite a number of small pieces of ice, which filled the inner basin and slowly streamed past us, creating much noise, if little danger.

A heavy swell from the S could possibly cause a yacht to be trapped behind the moraine until such time as it subsided.

This anchorage is in a most spectacular setting, with the glacier descending the mountain almost vertically. There is good shelter from the N and W and little swell. 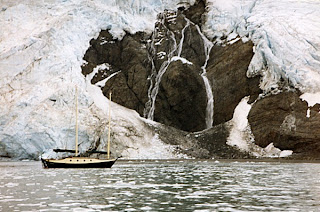 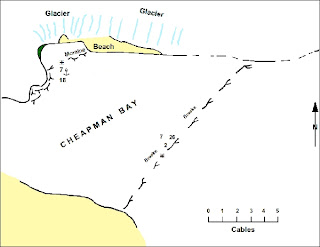