This is the next bay N of Cumberland Bay. It has three arms with a whaling station at the head of each bay.

The southernmost arm of Stromness Bay contains Husvik Harbour. The centre of the bay is a mass of kelp with the Bar Rocks marking the S end. The main channel to the S of the Bar Rocks is the more straightforward. There is also a passage along the N shore, but there is some kelp here.

Suitable depths for anchoring will be found at the head of the bay. In 1995, the wooden pier is in a very poor state, but it was possible to go alongside the N side. About midway along, there was a length of dock with an extra plank to make fending off possible. Prudence would dictate laying out an anchor to the N, in order to be able to pull away from the jetty in winds from this quadrant. The S side of the pier has a railway line; walking along this was the safest way to get ashore, but be very careful when using the jetty because it has many loose, missing and rotten planks. When visited, a couple of terns were nesting on the dock. A very sharp lookout should be kept if there are obviously agitated birds about, because neither the egg nor the chick would be easily seen.

The remains of a whaling station are here, in the usual ruined and vandalised state. Of particular interest is the old whale catcher, Karrakatta, high and dry on the beach: she was used as a steam plant for many years.

BAS used to have a summer-only field station at Husvik, with four staff. They lived in the house at the S end of the factory. If this staion is still operating, It would be courteous to contact them to avoid interfering with any of their projects or experiments, when ashore. Depending on their workload, offers of hospitality would probably be much appreciated.

Good walking can be enjoyed in the area. A three -our walk, S up the Olsen Valley, takes you to Carlita Bay or the Neumayer Glacier. It is possible to walk up the Karrakatta Valley and over to Fortuna Bay, as well as round to Stromness and Leith Harbours. 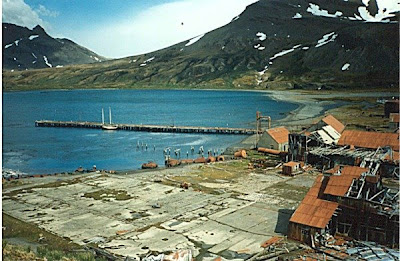 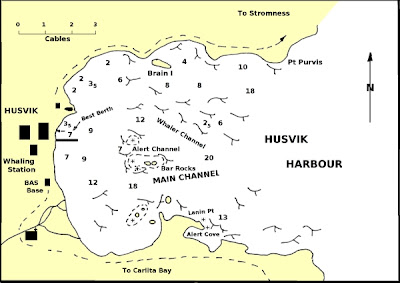