Bird Island is a SSSI, hence visits to the island are not allowed unless special permission is obtained through the Assistant Commissioner to South Georgia. BAS have a base on the island at Jordan Cove, where birds and mammals are studied. In 1995, three people wintered over and up to eight people spent the summer there.

There are shoals in the Sound and the Hornaday Rock is in the middle of the passage. Two passages lead through the Sound: one to the N and one to the S of the shoals. Although the N passage is narrower, by keeping close to the shore of Bird Island, it is straightforward.

On the day that we passed through the Sound, the shoals were breaking heavily and creating a very confused sea. I suspect that the wind normally blows either up or down the Sound. Sailing through, except with a following wind, would usually be extremely difficult.

At the W end of Bird Sound lies a well-protected cove, with two arms.

The approach is through a fairly narrow lead between kelp banks and rocks on either side, leading in a NE direction. The entrance itself is very constricted, with rocks on the W side and strands of kelp right the way across.

The north arm of the cove is the more protected, with the swell rarely reaching it. The depth is apparently only 1.5m in the middle (less than is shown on the chart). Jérôme Poncet laid a mooring for his 50ft Damien II in 1992. It consists of 250kg of anchor and chain. The orange mooring buoy gets lost from time to time, so if you are planning to use the mooring, you may have to drag for it. It is not known how often the mooring is inspected. If you are not planning to use the mooring, it may be worth having a trip line on your anchor. There is not sufficient swinging room to lie to a single anchor and Damien II always has a line ashore to the jetty.

The W arm is bigger and deeper. Anchor in the middle in 2.75m, where there is sufficient room to lie to a single anchor. This arm is apparently subject to some swell in gale force winds. 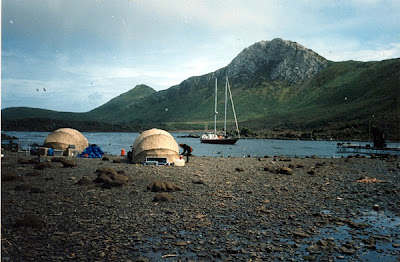 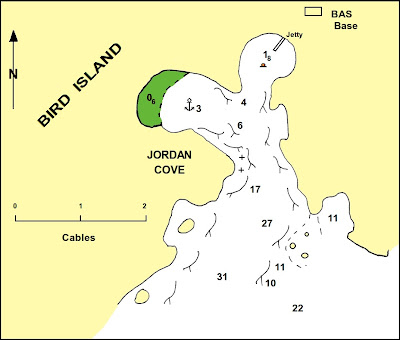