My apologies for the photograph, which has come out in black and white. This happened during the scanning process and I no longer have the colour original.

Stromness is the site of a whaling station, which was latterly used as a ship repair facility for the whaling fleets in the area. In 1995, the main wharf was in a reasonable state of repair and had some newish, black rubber ship fendering in places. There is a depth of 6m alongside.

Curlew reported that they often lie between the main dock and the one to the S of it, with lines to each. It is shallow enough to anchor between the docks until the boat can be tied up.

The bottom drops away sharply from the dock to over 30m, so it would seem impractical to lay out an anchor to hold the vessel off. Although Grass Island protects the bay from the E, there is still a 1½ mile fetch, and it would probably be very uncomfortable alongside in a strong E'ly blow.

The station is of interest, but it is falling down and has been subject to vandalism. The Manager's Villa at the S end of the station, is where Shackleton and his companions arrived after crossing the island. A plaque to commemorate this has been placed outside the house on the land side.

There are walks to Husvik and Leith and a longer one over the col to Fortuna Bay.

The Pilot warns of very strong winds during offshore gales. A large, yellow mooring buoy maintained by the Admiralty, lies in the bay.

If obtaining water from the stream it is advisable to go well up above the tanks, which may be leaking and polluting the water. 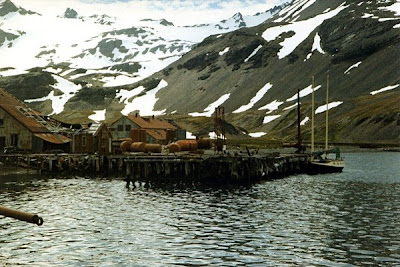 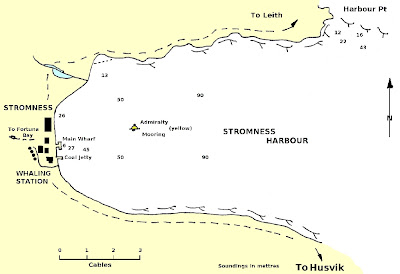