The following notes on anchorages in South Georgia were made assembled during a cruise made to the island in the summer of 1995. At the time I was sailing aboard Badger, with Pete Hill. We compiled notes and chartlets for the Royal Cruising Club, but I now want this information to be available to more people and for this reason am slowly incorporating them into this blog. One day, I hope, Trevor and I will sail to South Georgia and perhaps enlarge on this work.

The information that follows is generally unavailable from any other source. While the UK Admiralty Antarctic Pilot is much more useful than is generally the case with such Pilots, most of the anchorages described below would get no more than a brief mention. The official charts are not very detailed – indeed, the ones we used were described at ‘Preliminary charts’ – but even modern, metric ones, drawn after the Falklands Conflict will, perhaps, lack some of the information which the sketches provide.

While publishing this information will encourage people to go to South Georgia, I should point out that this is not something that should be undertaken lightly. Conditions in the Southern Ocean can be extreme, as anyone who has read Gerry Clark's book, The ‘Totorore’ Voyage, will appreciate. It provides some very sobering accounts of how bad such sailing can be and anyone interested in cruising South Georgia should certainly read this book first. Anyone sailing in these waters must be totally self-sufficient and prepared to extricate themselves from any eventuality. There are no rescue services and help should neither be sought nor expected from the Authorities in Grytviken. It should be remembered that it is impossible to replenish both stores and fuel.

As well as being meticulously prepared for sailing in these latitudes, a yacht’s ground tackle must be heavy and reliable. Hurricane force winds in apparently sheltered anchorages are not uncommon and, indeed, not one of the following anchorages could fairly be described as perfectly sheltered from all directions. Adequate ground tackle that will cope with these conditions, should be carried. This will mean that the anchors and chain will seem ridiculously oversized for general cruising. Your life may well depend on it.

Weather conditions can change with extreme rapidity and a barograph is an enormously useful aid to weather forecasting.

The accuracy of available charts should not be relied upon. A number of rocks and shoals are unmarked and there are also large discrepancies in many areas between the position as indicated and that obtained by GPS.

The sketch charts included in these notes are just that. They were drawn with reference to actual features and the (old) Admiralty charts that we had on board. While I hope that they show all the pertinent information, they should be treated with caution. In anticipation of the metrication of the relevant charts, soundings are given in metres, to an approximate mean low water springs level. Heights are also in metres.

Nearly all the anchorages are illustrated with a photograph, showing Badger. This provides a scale and shows exactly where we dropped our hook. It is also a memento to this fine, little ship.


The following people extended help and advice to us: Tim and Pauline Carr, Pat and Sarah Lurcock, Rick, skipper of the Abel-J, Russ Manning, Sally and Jérôme Poncet. 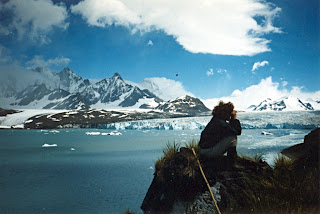 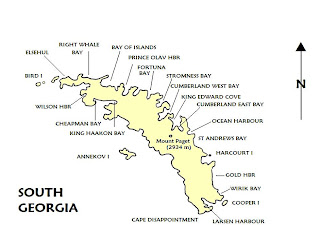 The island of South Georgia lies between latitudes 53o56'S and 54o55'S and longitudes 34o45'W and 38o15'W. It is very mountainous and over half of its area is permanently covered in ice and snow. The island lies within the Antarctic Convergence, which accounts for the severity of the weather. South Georgia is a British Possession.

The first recorded sighting of the island was by Antoine de la Roche, a London merchant, in 1675, but it wasn’t until 1775 that anyone landed ashore to explore. Captain James Cook carried this out on his second voyage of discovery.

Exploitation of South Georgia started in 1786, with the killing of fur seals. The sealing was so extensive that by 1802 stocks had become too depleted to make their continued hunting viable.

The next animals to be exploited were the whales. This period lasted from 1904 until 1966; again, this was discontinued when the animals were almost wiped out.

In 1982, South Georgia was invaded by Argentina at the start of the Falklands Conflict, but was retaken a few weeks later. A result of this was that for the next 20 years, a British garrison was maintained in Grytviken. Thankfully, this is no longer the case and members of the British Antarctic Survey have taken their place.


The Governor of the Falkland Islands usually holds the post of Commissioner for South Georgia and the South Sandwich Islands, although they are administered separately.

Before visiting South Georgia, permission should first be obtained from the Commissioner, by writing to him, enclosing a rough itinerary and basic details of the boat and crew. This is usually a perfectly straightforward business for a cruising yacht. The address is as follows: The Commissioner for South Georgia and the South Sandwich Islands, Government House, Stanley, Falkland Islands, South Atlantic, via London.

If you are unable to apply in advance, then the boat should proceed directly to King Edward Point, where permission to cruise the island may be sought through the Marine Officer.

There is an entry charge, sufficiently steep to amount almost to a ‘fine’, of £150 (info as at 2007), payable to the Marine Officer on arrival. Although a British cheque was accepted in payment, it would be wise to have the correct amount in cash.

I believe that there is some effort made to control movement of visitors and restrict them from visiting the old whaling stations. Ostensibly this is for their own safety, but one wonders if it is not simply that the British Government is rightly ashamed of allowing such appalling pollution to exist in what should be a pristine environment. While the old stations are interesting in their way, they stand as a telling monument to greed, exploitation and environmental carelessness, which is almost criminal in its extent.


When the wind around South Georgia reaches gale force and above, it can result in williwaws, which can reach hurricane force, even in an apparently snug harbour, due to the turbulence produced as the wind passes over the jagged mountain landscape. In the following notes, any reference to shelter refers to that protection given from the sea. As far as I know, every anchorage is subject to violent squalls in certain circumstances.

The best weather is to found on the so-called ‘Sunshine Coast’ between Cooper Sound and the Bay of Islands. The NW and SE tips of the island suffer from a greater amount of overcast and the weather is generally unsettled. The SW coast is open to the prevailing winds and is very exposed with few good anchorages – this coast should be treated with the greatest respect.


South Georgia is covered in the Antarctic Pilot, published by H M Admiralty. The following charts are also available from the Admiralty:

This is the up-to-date list (2007), but the following notes refer to the older charts, which were on board Badger when we cruised the island. There are fewer charts published for South Georgia than was once the case and it would be worth getting hold of superseded, second-hand charts, if possible. As is so often the case, the old imperial charts show much more detail than the new metric ones.


The fur seal population has increased dramatically in the last few years and is now believed to be back to at least its pre-sealing levels on the Island. Because of this, many of the beaches are packed with fur seals and these can make trips ashore harrassing and occasionally hair-raising. The worst time is in the breeding season, which is from October to early January, when the males, in particular, are very aggressive. Unless you have previous experience, your first trips ashore can be alarming.

From experience, a bodger, a stick of at least four feet such as a boathook or an oar, should be carried by each person. Fur seals will often make what appears to be an attack, but pointing the bodger at them usually halts them and a light tap under the chin will deter the more persistent. It is unnecessary to use force. You can literally stumble over fur seals amazingly far up the hills, where they can lie hidden in tussac grass. If you come across one suddenly, you will both get a fright and the animal’s response is, not unnaturally, quite aggressive.

The first time you go ashore, don’t be too ambitious and concentrate on getting used to the seals and their behaviour. After a while, you will become more blasé and experienced people almost ignore them. After the breeding season, they become much less aggressive, but are still very inquisitive. The pups, in particular, can be quite enchanting as they come charging out to meet the dinghy when you row ashore.


There are two SSSIs and one SPA in South Georgia, ie Bird and Annenkov Islands and Cooper Island. Full details of these areas will be found in Sally and Jérôme Poncet's booklet, Southern Ocean Cruising.


There are two bases maintained by BAS. Bird Island has a year-round base with three people overwintering and as many as eight people there during the summer. The other site is at Grytviken.
Posted by Annie Hill at 10:27 am