KING EDWARD COVE
54o16'S 36o30'W
Chart 3589, Plan of King Edward Cove
General
King Edward Cove is in Cumberland East Bay, about half way along the NE coast of South Georgia. The administrative centre is at King Edward Point at the entrance to the cove. At the head of the bay is the disused whaling station of Grytviken.
Being the administrative centre of the island, King Edward Cove should be the first stop in South Georgia. The Marine Officer will call once the boat is secured and deal with the formalities.
Anchorage
Yachts normally berth at Grytviken alongside one of the wooden docks, which are in a poor state of repair. The best place, however, is alongside the old whale catcher, Petrel, at the S end of the whaling station, which, in the summer of 1994-95 was holed and resting on the bottom. This berth was used by Tim and Pauline Carr on Curlew for several years, summer and winter. Tie up alongside with the bow facing offshore and take a breast line ashore to the wooden jetty to the N. This will enable you to haul off Petrel in the case of an E wind and to ride out a blow in relative comfort. There is a depth of 3m, amidships, alongside Petrel.
The second choice is to tie up in the bight of the old plan, between the two piers and alongside the N one. Tie up facing E (offshore) and take a breast rope ashore to the S jetty (in poor condition), again to enable you to pull off in an E wind.

A third option is to tie up alongside either of the two wooden docks which have approximately 3m depth. It is advisable to set an anchor offshore, either to pull the boat off the pier in an E'ly or to assist in leaving the jetty in an E blow when it may well be untenable alongside.

The dock at King Edward Point has a depth alongside of 6m, but it is inadvisable to remain there except in settled weather. Even with a wind out of the E, the swell makes it uncomfortable for a yacht. During E'ly winds, a sheltered anchorage will be found in the bight of King Edward Point, in a depth of 8m, clear of the kelp.

There is an excellent museum in the old Manager's House at Grytviken. It has a small shop selling postcards and souvenirs.

Water is obtainable from the stream inland of Petrel, with a grassy bank giving easy access. The big guano shed alongside the stream provides a good place to dry laundry. Water can also be obtained from a pipe near the shore, close to the Museum.

King Edward Point has a post office. Mail is delivered by air at intervals of approximately two weeks. This is air-dropped into the Cove by an RAF aeroplane, sent from the Falklands. Surface mail and outgoing mail is sent via the supply ship at intervals of about two months. Incoming airmail should normally take around one month from Great Britain. South Georgia stamps with the King Edward Point frank are regarded as collectors' items.

There are no other facilities on South Georgia.

The pecked line, on the sketch chart shows some good walks from Grytviken.

Sir Ernest Shackleton died of a heart attack on board the Quest at Grytviken, in 1922. The conspicuous white cross above King Edward Point is his Memorial. He is buried in the graveyard to the S of Grytviken. 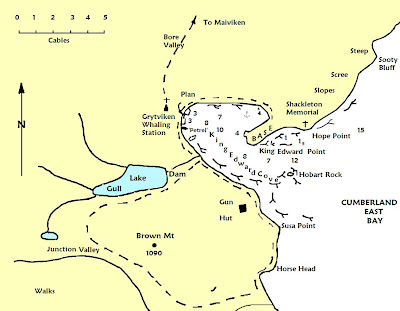 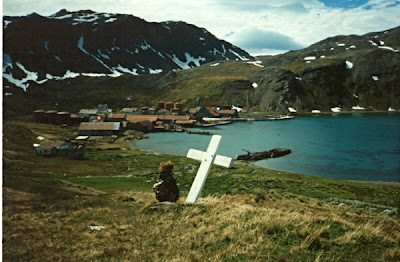