Gough Island lies just in the Roaring Forties and is 230 miles SSE of Tristan de Cunha. It is a dependency of St Helena. The South African Government lease the island for use as a weather station, which is situated at Transvaal Bay on the SE end of the island. Visitors are not permitted ashore unless they have a medical emergency– such as a loose filling. There is a paramedic on the island, who was very obliging about Badger’s emergency.

Gough Island is well watered and covered in luxurious vegetation. There are several mountains, the highest being Edinburgh Peak at 910m.

We anchored in Transvaal Bay, nearly 1 cable N of Standoff Rock and a little S of the gorge, S of the met. station, in a depth of 13m, rocky bottom. This gives good protection from the W’ly quadrant, but is otherwise exposed. There is no easy landing ashore, but it might be possible to do so at the gorge (the cliffs are very steep, but a rope on the N side of the gorge, is rigged to assist access).

On the cliff by the met. station is a crane, which is used to offload the stores. Contact with the station personnel will probably be made via this, as they have no boat of their own: a small platform is lowered, which can take several people.

Badger sailed up the coast to The Glen anchorage and it appears to offer reasonable shelter from the SW quarter. When visited, there was only a slight swell running and it appeared possible to land on the beach.

The Island is quite beautiful; many yellow-nosed albatross were nesting when visited. However, there is a good chance that weather conditions might prevent a stop being possible. 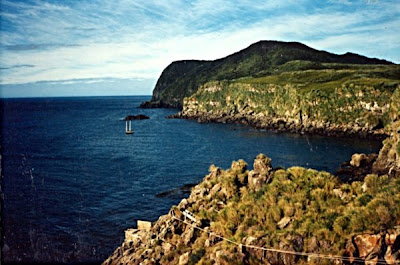 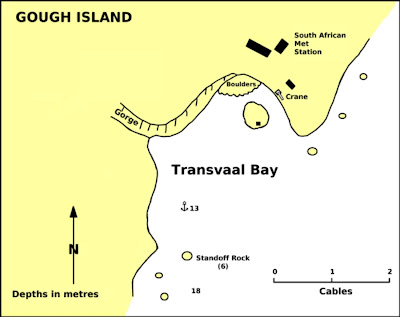 Hi Annie, from Gough Island. My boat Obelix is currently anchored in Transvaal Bay while I visit the Met Station. Friends of mine on Pelagic Australis, who will sail by in a few months on passage from Chile to Cape Town just as I am doing now asked for any useful further info on the anchorage : I found your notes and am forwarding your drawing of the bay and your anchoring spot (adding a couple items and my own anchoring spot and depth), so I just wanted to say thank you very much! Fair winds and safe continued travels,
--Matt